Employers in California are required to comply with all federal, state, and local laws. Unfortunately, labor law violations are all-too-common in workplaces throughout the state and when these employers break the law, the health, safety, and well-being of employees is at risk. 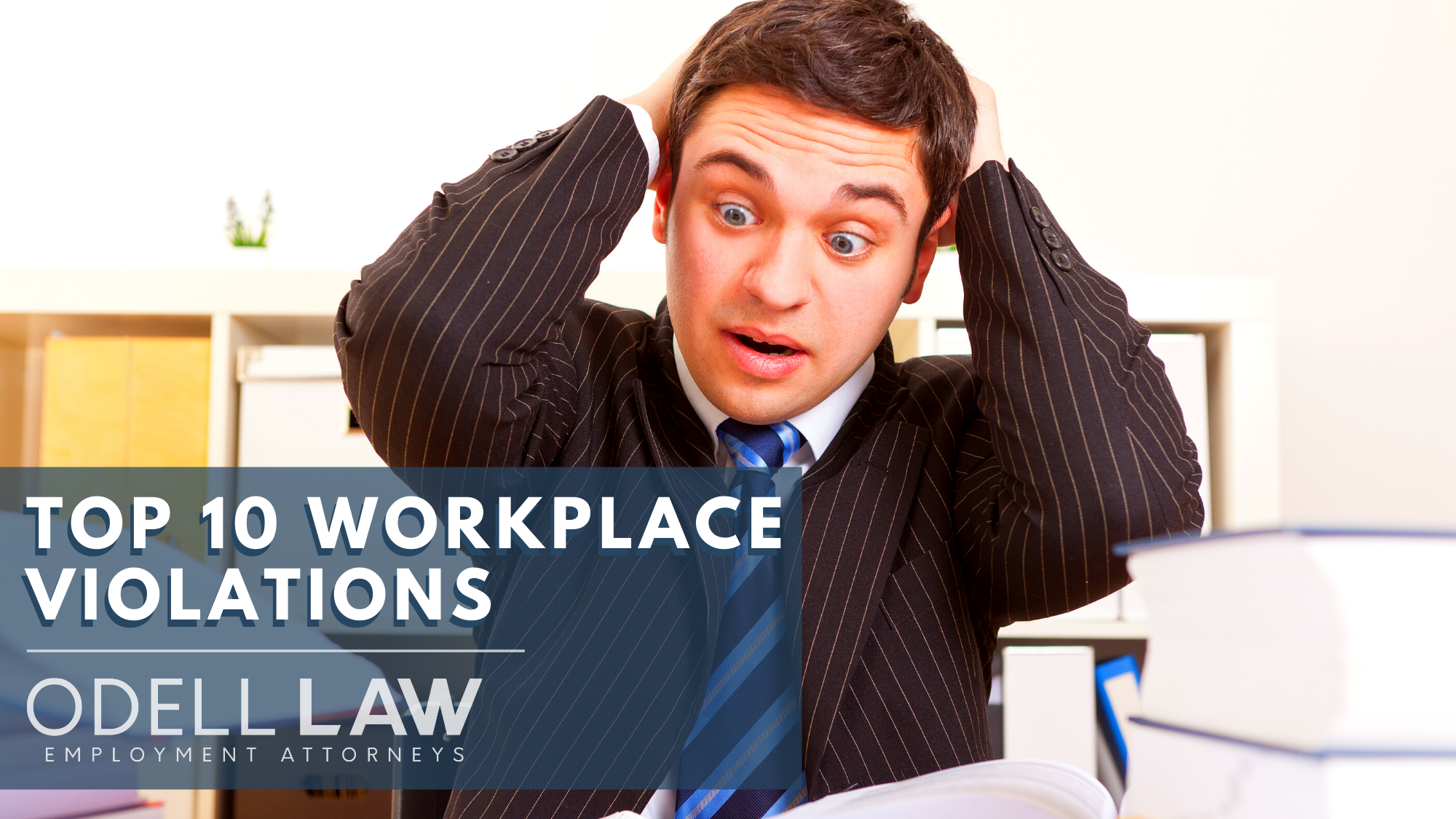 If you believe your employer has violated the law, then you may be able to pursue legal action against them. In order to do so, you will need to have a basic understanding of what rights you have – and how you can protect them. Below, we have outlined 10 of the most common workplace violations in California. If you believe that your employer has committed one of these violations (or another that isn’t on the list), reach out to a skilled Orange County employment lawyer to schedule a free consultation.

Violation 2: Not Paying Wages for All Hours Worked

Sometimes, employers often require employees to do things related to their job while not technically on-the-clock. This includes situations where employees are asked to clock out and continue to work during a lunchtime rush at a restaurant, and the employer failing to pay the employee at a premium rate for the missed rest/lunch period.

In addition, in the event an employee is terminated, an employer may be liable for “waiting time penalties,” for failing to pay all wages owed to the employee after termination. These penalties can result in a vast amount of wages the employee may be entitled to.

Under California’s Fair Employment and Housing Act (FEHA) as well as Title VII of the federal Civil Rights Act of 1964, employees are prohibited from discriminating against employees and job candidates on the basis of their membership in a protected class. In California, protected classes include:

If an employer discriminates against an employee in some way – such as cutting an employee’s hours, for example, due to their race or religion – then the employer will be held responsible for any losses that the employee suffers as a result. These types of claims require employees to follow a specific procedure, which typically starts with filing a claim with the California Department of Fair Employment and Housing (DFEH) or the federal Equal Employment Opportunity Commission (EEOC).

In sales jobs, an employee’s right to commissions is governed by an agreement between the worker and their employer. Under California law, all sales contracts must be in writing and must outline the way the commission will be calculated and paid to the employee.

While the existence of a contact can help to ensure that employees are protected, that is not always the case. Some employers will try to find ways around the terms of the contract – or flat out choose to not uphold their bargain of the contract.

Mark works in equipment sales. He spent months securing a large contract, and performed all of the work required to obtain his commission. Before the customer makes the payment, his company lays him off – and doesn’t pay him his  commission. His contract does not specify that he can only be paid a commission while still employed. In this situation, he may be able to pursue a lawsuit against his former employer.

Violation 5: Misclassifying a Worker as Exempt

Non-exempt employees are entitled to a greater protection of wage and hour laws, including the right to receive a minimum wage, overtime wages, and meal and rest breaks. Employers may try to work around these requirements by classifying an employee as exempt, for example, to avoid paying overtime and providing other protections (such as meal breaks). If your employer has misclassified you as exempt, then you may be able to file a claim against them for unpaid overtime and other violations.

Unfortunately, sexual harassment remains far too common in California workplaces today. It is defined as unwanted sexual advances and/or any visual, verbal, or physical conduct of a sexual nature.

Under current law, a sexual harassment claim must be based on either quid pro quo harassment (i.e. where a supervisor offers something in exchange for some sort of sexual favor) or hostile workplace harassment (i.e. where the conduct of a coworker or a boss is so severe and pervasive that it makes it impossible for you to do your job). If you have been subjected to either type of sexual harassment in the workplace, then you may be entitled to compensation for any losses that you experienced as a result – such as having to leave your job because of the harassment.

Employees have certain rights in the workplace. This includes the ability to file a complaint about wrongful or illegal conduct, seek workers’ compensation benefits, or for refusing to participate in illegal activity. If an employer terminates or performs any adverse employment action against an employee for exercising their legal rights, then the worker may be able to file a lawsuit for retaliation.

Jeff notices that his employer is overcharging the government for services that were never rendered. He decides to file a whistleblower complaint and reports the incident to human resources. However, when Jeff’s employer finds out, they immediately terminate his employment. In the example, Jeff may file a lawsuit against his employer for retaliation and wrongful termination.

Non-exempt employees are entitled to overtime wages under federal and California law. This means that for every additional hour worked in a 40 hour workweek, the employee must be paid at a rate of one-and-a-half times their usual hourly rate. If an employer fails to pay overtime, then any affected employee may file a lawsuit against them.

Employers may try to avoid paying overtime in any number of ways.

Carolyn works at a job where the amount of work that needs to be done can vary from week to week. When she works more than 40 hours in a week, her boss shifts those extra hours to the following week, where there is less work. Here, her employer is illegally lowering the amount of overtime due to her for that specific workweek – which is a violation of the law.

California is an at-will employment state, which means that – with a few exceptions – your employer may fire you at any time, for any reason. However, if your employer fires you for an illegal reason, then it may be a basis for a wrongful termination lawsuit.

Illegal reasons to be fired may include termination based on your membership in a protected class (discrimination), retaliation, or for filing a workers’ compensation claim. Whatever the reason may be, if you believe that you have been fired for an illegal reason, a seasoned Orange County employment lawyer can help you pursue a claim.

Employers may violate this law by paying employees under the table, asking employees to work off-the-clock, or misclassifying workers as independent contractors or as exempt employees. If your employer has violated the minimum wage laws, then you may file a complaint with the California Department of Labor, or pursue a lawsuit with the help of an attorney.