Can I Sue for Sexual Harassment During a Job Interview?

Job interviews are almost always incredibly stressful. You want to make a good impression, and of course, get hired. Sometimes, many interviewers ask a lot of tough questions, which may put you on the spot and make you feel nervous, but what happens if the interviewer does more than just ask hard questions — and they sexually harass you?

Under both state and federal law, job applicants are protected from harassment and discrimination, just like employees would be in regular employment. If you are sexually harassed by the person who interviews you, then you may be able to file a lawsuit against them with the help of an experienced Orange County employment lawyer. 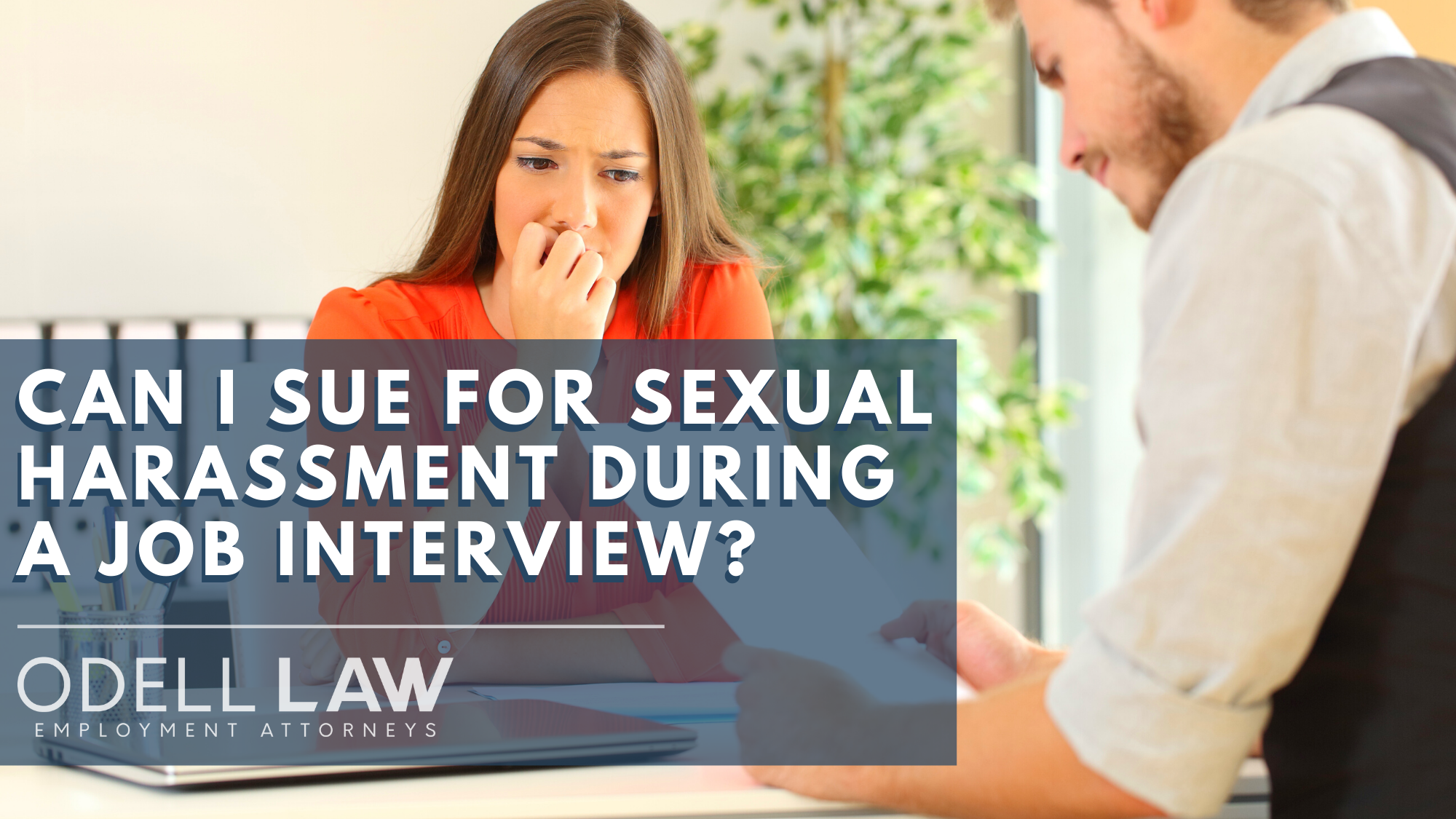 Filing a legal claim against a prospective employer may seem daunting. Yet, it may be the only way to obtain justice for the way that you were treated — and to stop the harasser from engaging in similar conduct in the future.

What Is Sexual Harassment?

Sexual harassment can occur in many different forms. In California, the Fair Employment and Housing Act (FEHA) prohibits sexual harassment in the workplace, similarly to Title VII of the federal Civil Rights Act of 1964, which also makes it illegal to sexually harass employees or job applicants.

There are two types of prohibited sexual harassment:

Conduct that falls outside of these definitions may be unwelcome — but it is may not be considered sexual harassment.

Examples of Sexual Harassment in the Interview Process May Include:

In some cases, questions asked during a job interview may be considered sexual harassment — or even workplace discrimination. In California, employers are only permitted to ask job applicants questions that will help them evaluate whether the person is qualified for the job. If the interviewer asks questions about the applicant’s gender, sexual preferences or activity, sexual orientation or gender identity, it is most likely illegal.

Can I File a Lawsuit for Sexual Harassment at a Job Interview?

Check Out This Example:

Nicki interviews for a job as a project manager at an engineering firm. During the interview, the company’s CEO openly stares at her chest and asks multiple questions about her relationship status. He makes several comments about how good she looks, and asks if she works out regularly. He then asks her if she would like to get drinks after the interview, and tells her that it would really help her application if she goes. Nicki does not want to go out with the CEO, and is flustered by the question and states she has other plans. A few days later, she learns that she did not get the job.

In this situation, Nicki may be able to file a lawsuit against the company for sexual harassment. The job interview was filled with inappropriate comments and a sexual advance, resulting in Nicki not receiving the job offer.

However, Consider a Slightly Different Version of Events:

During the job interview, the CEO does not leer at Nicki, and focuses on questions related to her qualifications for the job. Towards the close of the interview, the CEO mentions that he would like the rest of the team to meet her, and tells her that they will all be going to a bar down the street for happy hour after work. He says that there is no pressure to join them, and that he can arrange for her to meet with the team members at another time if this doesn’t work for her. Nicki has other plans, so she says no. A few days later, she learns that the company hired a different candidate with more experience than she has.

Here, Nicki most likely does not have a case for sexual harassment. While the CEO invited her out for drinks, it was to meet her potential colleagues and it was made clear that Nicki could refuse if she pleased. The CEO also did not make any inappropriate remarks or ask any questions that were out of bounds. Under these facts, sexual harassment mostly likely did not occur during this job interview.

How Do I Sue The Potential Employer?

Victims of sexual harassment may recover financial compensation — known as damages — in a lawsuit. Depending on the facts of your case, this may include money for back pay, front pay, pain and suffering, mental anguish and loss of reputation. Under the FEHA, employers may only recover these costs from a job candidate or employee if the complaint filed is deemed frivolous.

It is important to note that under a relatively recent update to California law, sexual harassment and sexual assault settlements cannot include a “gag” provision that would prevent the victim from talking about the harassment. If a settlement includes this type of non-disclosure provision, then that part of the agreement is not enforceable. As a result of this, victims of sexual harassment are able to speak out about what happened to them — and possibly prevent others from being harmed in the same way.

If you were sexually harassed during a job interview, then you may be able to file a lawsuit in court against the company. However, before you can do so, you must file a complaint with either the federal Equal Employment Opportunity Commission (EEOC) or the California Department of Fair Employment and Housing (DFEH). A seasoned Orange County employment lawyer may help you with the process, starting with a free consultation where they will explain your rights and options for pursuing a claim.

Facebook
Twitter
LinkedIn
PrevPreviousMy Boss Failed to Promote Me. Can I Sue?
NextWhat Should I Do if I Feel I’m Dealing with National Origin Discrimination at Work?Next