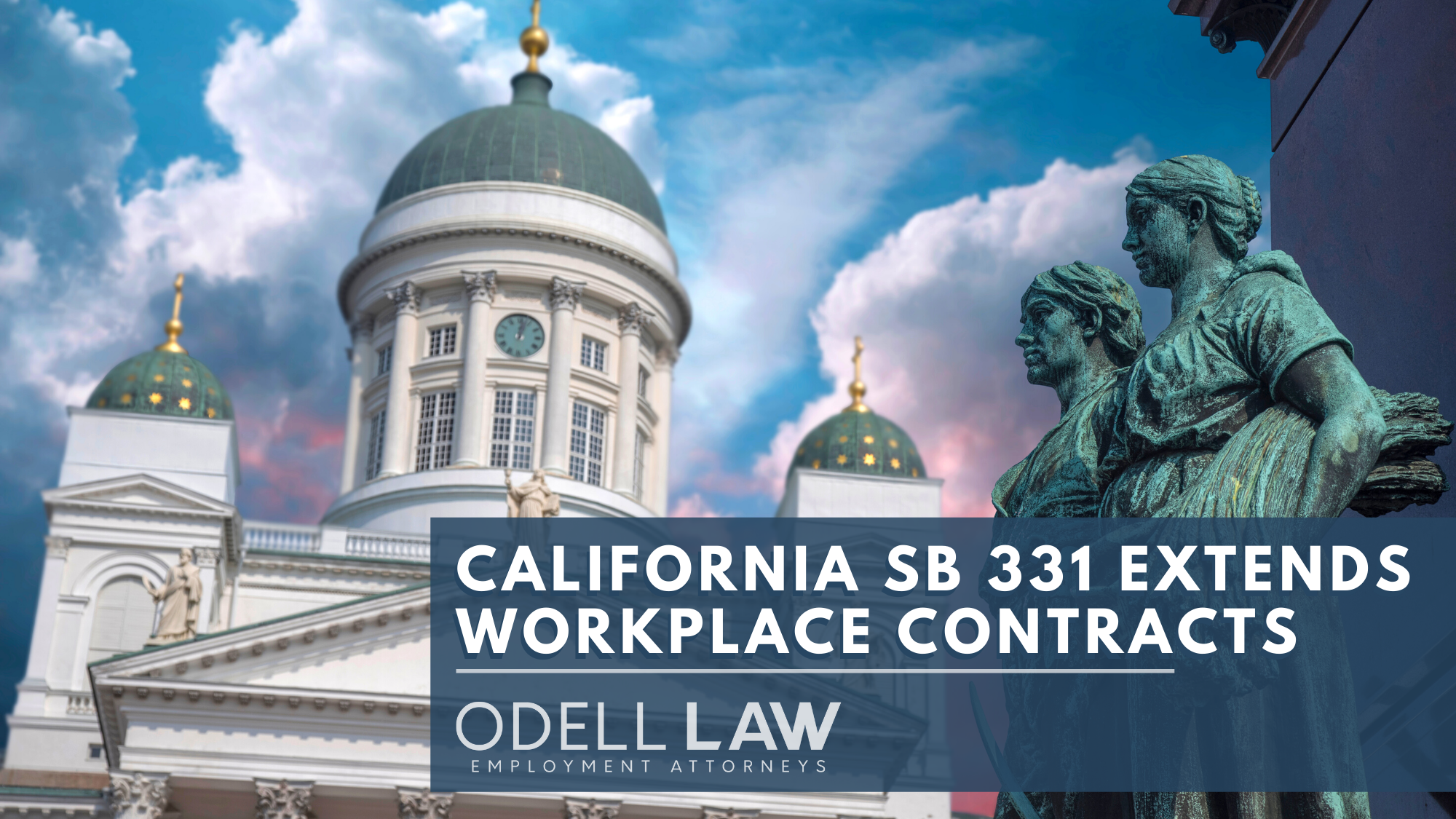 Senate Bill 331 (SB 331), recently signed by Governor Newsom, will now give employees throughout California even greater protections when it comes to settlement agreements, separation agreements, and other types of workplace contracts. As a result of the enactment of this law, workers throughout California may hopefully experience less discrimination and harassment, and now be able to speak out about their experiences if it occurs.

At Odell Law, we are committed to helping employees who have experienced all types of workplace injustice. If you have been subjected to discrimination, harassment, or have been wrongfully terminated, give us a call to schedule a free consultation with an Orange County employment attorney.

SB 820, which was passed in 2018, prevented employers from imposing non-disclosure agreements (“NDA”) or similar provisions as a condition of a settlement in sexual harassment, sexual assault, or sex-based harassment and discrimination cases. This law was proposed in response to the #MeToo movement after employers’ long time practice in using NDAs to shield serial harassers from public exposure came to light. Importantly, this law only applied to cases involving sexual harassment, sexual assault, or discrimination and harassment based on sex.

However, now with Senate Bill 331 – also known as SB 331 or the “Silenced No More Act” – this gives California employees even greater protections when it comes to their employment claims based on other protected categories.  Under SB 331, the ban on confidentiality agreements and NDAs would extend to all settlements involving workplace harassment and discrimination on any protected basis. As such, SB 331 went into effect on January 1, 2022, and only applies to agreements entered into on or after this date.

Blanca is a transgender woman who works as a nurse at a hospital. When her boss finds out that Blanca is transgender, she fires her. Blanca then files a claim with the Department of Fair Employment and Housing (DFEH) for discrimination on the basis of gender identity or expression. Shortly after, Blanca reaches a settlement with the hospital. Under SB 331, the hospital may not forbid Blanca from discussing or disclosing information relating to her workplace discrimination or harassment she experienced as part of her settlement agreement. However, Blanca may request for a provision that protects her identity as part of the settlement agreement if she still wishes to keep her experiences confidential.

Likewise, under SB 331, it is unlawful for an employer, in exchange for a raise or bonus, or as a condition of employment or continued employment, to require an employee to sign a non-disparagement agreement or other document to the extent it would prohibit an employee from disclosing information relating to unlawful acts in the workplace. Non-disparagement clauses are often used by employers to prevent former and current employees from talking about their workplace – which may allow illegal employment practices like harassment and discrimination, to flourish. Starting in 2022, employers may not bar current or former employees from talking about any these unlawful acts in the workplace.

Finally, SB 331 also requires California employers to inform employees of their right to consult with an attorney regarding any separation agreement and to give them at least 5 business days to do so. While employees do have the right to waive this waiting period, the waiver must be voluntary.

One of the biggest revelations of the #MeToo era was how frequently companies used confidentiality agreements, non-disparagement clauses, and NDAs to protect alleged sexual predators. For example, Bill Cosby, Harvey Weinstein, Bill O’Reilley, and Les Moonves all used NDAs when settling claims of sexual misconduct. Due to the fact their victims were not permitted to speak out without risking a heavy financial penalty, these men were able to continue abusing women with no deterrence. Banning NDAs and other forms of confidentiality clauses in sexual harassment, and overall discrimination cases, will end this culture of silence around these issues.

Further, with SB 331, companies may no longer hide behind confidentiality agreements to avoid accountability for harassment and discrimination of any kind. This will hopefully lead to less illegal conduct in the workplace, as victims will now be able to speak publicly about what they have experienced.

If you have been harassed or discriminated against at work, reach out to a Southern California employment lawyer to learn more about your rights as an employee. You can reach us at info@odelllaw.com, filling out the form below or giving us a call at (949) 833-7106.

Facebook
Twitter
LinkedIn
PrevPreviousSenate Approves New Workplace Sexual Misconduct Law in 2022
NextOvertime Work – Can I Be Fired for Refusing Overtime in 2022?Next

Can My Employer Force Me To Go To Arbitration For My Sexual Harassment Claim?

Can My Employer Force Me To Go To Arbitration For My Sexual Harassment Claim? If you have ever experienced sexual harassment at work, it’s important …