How Do I Deal with Religious Discrimination?

What Is Religious Discrimination?

The United States was founded on several important principles and ideals that, while not perfect, strive for equality. One of the earliest and most important of those ideals is the concept of “freedom of religion.” Rather than a uniform, state-sponsored religion, the government cannot force any person to practice (or not practice) any certain religion. 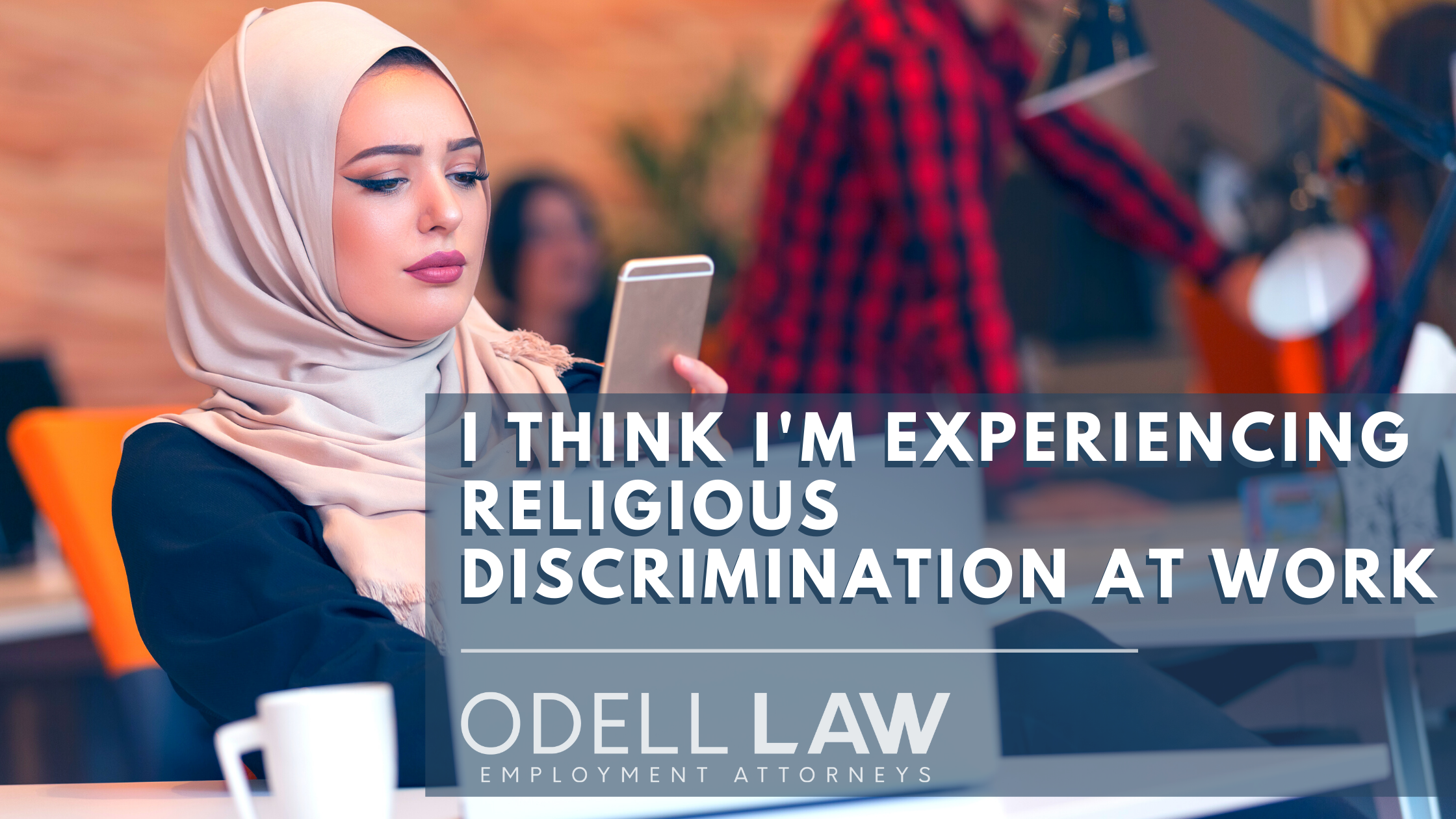 Despite this fundamental principle, religious discrimination still happens in the U.S., including here in California. This happens when people are treated differently, or less-favorably based on their beliefs, including in the workplace. Religious discrimination can take many forms, from refusing to hire a job applicant to changing someone’s duties or hours in a negative way.

Under both federal and California state law, employers are strictly prohibited from discriminating against a person for their religious beliefs and practices unless they can show it is absolutely necessary for the safe operation of their business. If you believe that you have been discriminated against on the basis of your religion, a seasoned employment lawyer can help. If you were terminated, you may be able to file a legal claim against your employer, and recover compensation for the losses that you have suffered.

Below is a general outline and introduction to the nuances of religious discrimination law in California.

Discrimination based on religion includes almost every aspect of religious belief or practice, including religious dress, religious observance, religious grooming practices and religious creed. The key is that the person has a sincerely held belief related to their religion.

Religious discrimination can happen in a number of ways, such as:

Importantly, an exception exists for employers that are religious corporations or organizations, as they are allowed restrict eligibility for employment based on religion in certain situations. Specifically, these restrictions may apply to positions that require the performance of religious duties.

In addition to not discriminating against employees and job applicants on the basis of religion, employers must reasonably accommodate religious beliefs and observances. Like reasonable accommodations for disabilities, employers must offer an accommodation as long as it does not cause the employer “undue hardship.”

Consider the case of Sarah, who is a pharmacist employed at a drug store:

She is an evangelical Christian, and has a religious objection to contraceptives. Her employer may reasonably accommodate her religious beliefs by allowing her to signal a co-worker to handle these prescriptions or transactions. However, if Sarah refuses to ask a co-worker to take over because she doesn’t think that anyone should fill the prescription, then this creates an undue hardship for her employer, and she may be disciplined or terminated.

Are All Religions Protected Under California Law?

All religions and sincerely held religious or moral beliefs are protected from discrimination. In fact, even a spouse’s religion and perceived religion are protected under these laws. This means that, even if someone mistakenly believes that you are member of a particular religion and discriminates against you, it is still illegal.

For example, many people of Indian descent, including Sikhs, face discrimination because people mistakenly believe that they are Muslim. As outlined above, this would still be illegal for an employer to discriminate against any employees on that mistaken basis – and the mistake of fact is not a legal defense to religious discrimination claims.

Religious discrimination often involves members of minority religions, such as Islam, Buddhism, Hinduism, and Judaism. However, even members of the dominant religious faith in the United States — mainly Christianity — may face religious discrimination in certain circumstances. In addition, it is illegal for an employer to discriminate against an employee for a lack of religious faith (such as atheism). The law protects both people who belong to traditional, organized religions as well as those who have sincerely held religious, ethical or moral beliefs.

How Do I Know If I Was Discriminated Against Because of My Religion?

Zarina is Muslim and works at a printing business. After working there for several years, she decided to start wearing a head scarf, or hijab, in accordance with her faith. Within a week of Zarina starting to wear a hijab, her employer tells her that she is being “moved to the back room to help fill orders.” Previously, Zarina had been at the front of the store, working with customers. In this situation, because the move away from customers happened almost immediately after Zarina began wearing a hijab and is likely based on that fact, this may be a form of religious discrimination.

Can I File a Lawsuit for Religious Discrimination?

Workplace religious discrimination is a violation of both California law and federal law. If you believe that you have been discriminated against because of your religious beliefs and/or practices, then you may be able to pursue legal action. The first step in this process is filing a complaint with either the California Department of Fair Employment and Housing (DFEH) or with the Equal Employment Opportunity Commission (EEOC). You must file a complaint with one of these agencies before you can move forward with a lawsuit. Notably, you should contact an employment attorney before filing with the DFEH or EEOC, as this is something most attorneys prefer to do on your behalf to ensure all the proper claims are alleged.

Generally, California law offers broader protection to employees when it comes to employment discrimination. For this reason, your attorney may advise you to file a complaint with the DFEH instead of the EEOC. There is also an option to request a right to sue directly from the DFEH, although this should only be done with the assistance of an attorney.

After you file a complaint, the DFEH (or EEOC) will begin an investigation. This may result in the agency pursuing the complaint on your behalf, or issuing a right to sue letter. In most cases, the agency will issue the letter, which gives you the ability to file a lawsuit against your employer, rather than taking on the case themselves.

In addition, you can request punitive damages, which are a specific type of damages that are meant to punish a wrongdoer for their conduct and to deter them from engaging in that type of behavior in the future.

In some cases, you may also seek an equitable remedy, which involves the court ordering your employer to do something or refrain from doing something. In employment discrimination cases, equitable remedies typically include requiring your employer to rehire you, promote you, or correct another wrong. However, many employees do not want to go back to a discriminatory workplace, and so they do not pursue this option.