Can My Employer Pay Me in Cash?

Can My Employer Pay Me in Cash?

Picture this scenario: You are recently hired for a new job. You fill out your new hire forms, and your boss approaches you about your form of payment, stating they would prefer to pay you in cash. You hesitate for a second, thinking of how badly you need the job, but not sure if whether being paid in cash can harm you in any way. What should you say?

Under California law, it is not illegal to pay employees in cash. However, it is against the law to pay employees “under the table,” generally meaning paying in cash with an intent to avoid payroll taxes. This could lead to a multitude of consequences, including permitting an employer to take advantage of workers by not paying them properly or for all recorded hours worked. 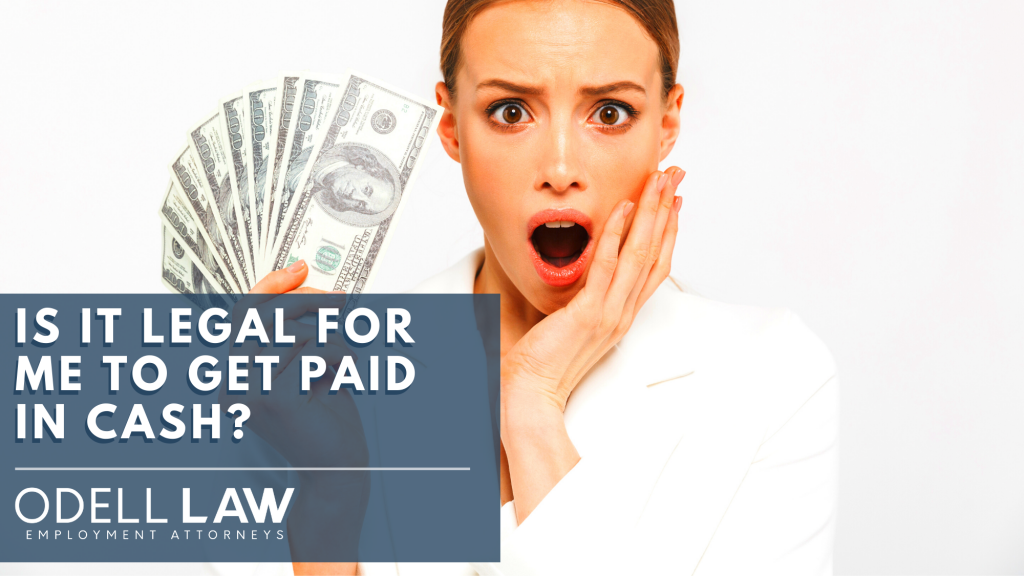 If your employer wants to pay you in cash, there are certain things you should know — including your legal rights and obligations as an employee. For more information, or to schedule a free consultation, contact a skilled employment attorney today.

Is It Illegal to Be Paid in Cash in California?

California law does not specify the method by which employees must be paid. This means that an employer can choose to pay via a business check, cash, personal check, or even electronically. However, regardless of the method chosen, employers must still comply with other aspects of the law.

The California Labor Code requires employers to provide certain information to employees, typically in the form of a pay stub, each time that an employee is paid wages. This requires:

In other words, it is acceptable for your employer to pay you in cash — so long as they also provide you with a statement each pay day that contains the above specified information.

Jackson works as a truck driver for a company that does commercial renovations. He typically works 10 to 12-hour days, 5 to 6 days a week — regularly working 50 to 65 hours a week. His boss pays him in cash, without a wage statement, so it is hard to keep track of what he is paid and if he is getting paid correctly.

One day, Jackson decides to sit down and figure out how much he has made for the year using his time sheets and records of bank deposits. He discovers that his boss hasn’t ever paid time-and-a-half (overtime) for weeks that he has worked more than 40 hours, and that his boss routinely shaves hours off of his pay each week. Without a wage statement, it may be hard for him to prove that his boss is violating both federal and state wage and hour laws.

While there may be good reasons for an employer to pay you in cash, be sure that before you agree to this arrangement you will still receive a pay statement as required by California law. If your boss refuses to provide you with this type of statement, it may be time to look for a new job — or to call a lawyer.

What Can I Do If My Employer Is Paying Me Under The Table?

Employers may attempt to justify their actions for reasons such as, “being paid in cash allows employees to earn more money,” “that it is common practice in their industry,” or that “it makes it easier to run their business.” In California, paying employees in cash is incredibly common, with an estimated 1 in 6 employees being paid under the table.

However, no matter what the rationale may be, it is illegal for your boss to pay you in cash without complying with other California requirements. Although it may seem like a good idea at first, it can lead to significant consequences, including:

If your employer is illegally paying you under the table, there are options. A seasoned Orange County employment lawyer can help you report your employer to the California Department of Labor. They can also work with you to put together a legal claim against your employer for unpaid wages, failure to provide breaks, and other violations of California Labor Law. While being paid cash can make it more difficult to prove your case, it isn’t impossible — and you still have the right to pursue a claim.