Prop 22 Ruled Unconstitutional: What Does This Mean for Gig Workers?

Over the past few years, a fierce battle has raged in the courtrooms and at the ballot box in California. The subject? Workers’ rights. In the latest round of this war, it appears workers’ have had a victory – but that may not be the final outcome. 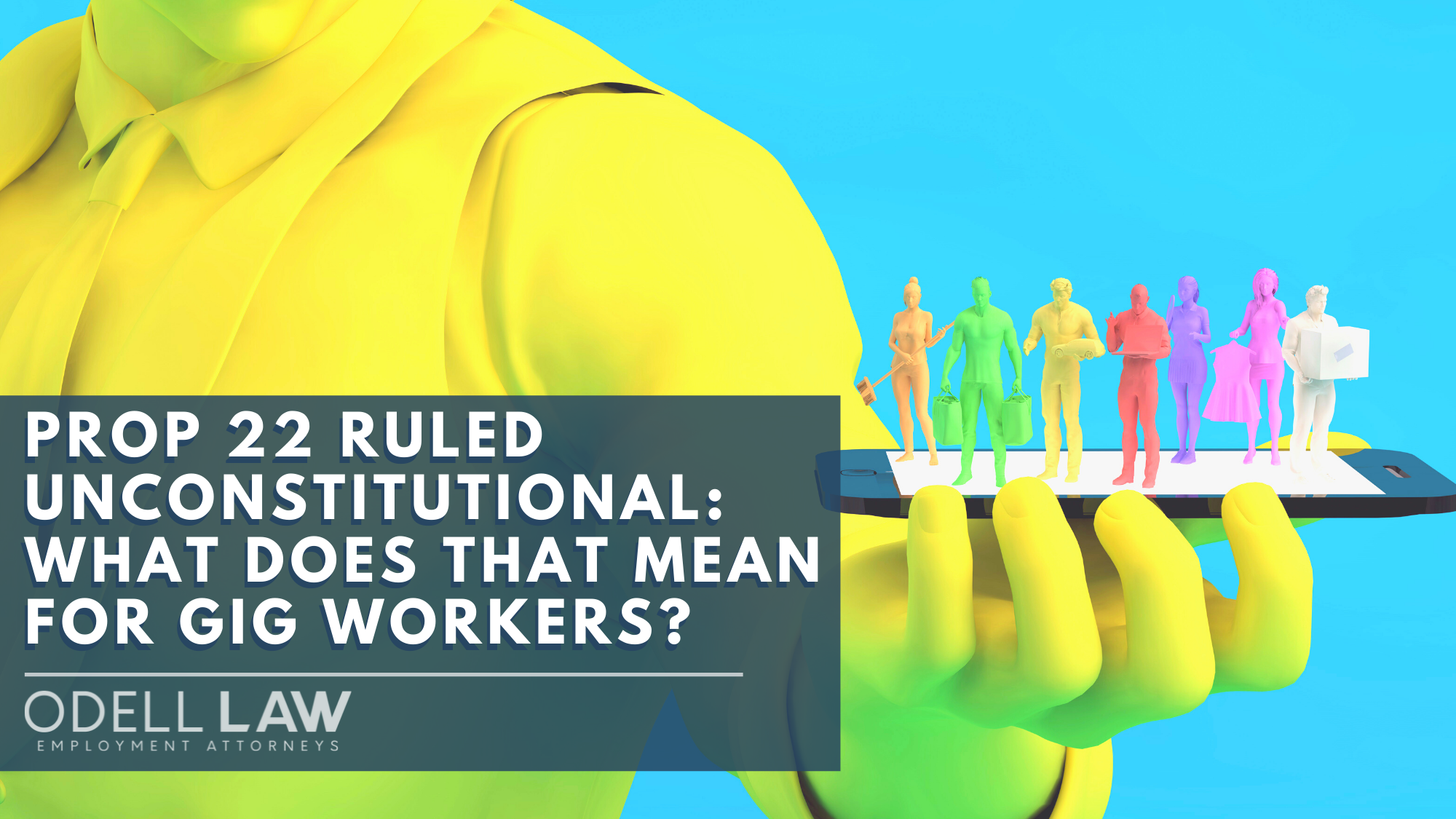 Currently, there is a large debate regarding worker classification in California as to what constitutes an independent contractor or employee. If a worker is classified as an employee, this brings more benefits and protections for him or her in the workplace. However, for employers, classifying workers as independent contractors means greater profits and fewer laws to follow.

In 2018, the California Supreme Court adopted a new standard for determining whether a worker was considered an employee or an independent contractor: the ABC Test. In contrast to prior standards, the ABC Test is considered to be very favorable for workers. The following year, the ABC Test was codified into California law through the passage of Assembly Bill 5 (AB5).

Under the ABC Test, a worker is presumed to be an employee – instead of an independent contractor – unless an employer can prove:

In response to the adoption of this test, many corporations have come together over the years to fight against these standards, which have allowed them in the past to avoid paying workers’ compensation, social security, unemployment, health insurance, and other benefits. Classifying workers as employees means these corporations will have to pay more money – and employees will have more protections under state and federal law. Tech companies such as Uber, Lyft, Instacart, Postmates and DoorDash were incredibly upset about the passage of AB5 and poured over $200 million into a campaign for Proposition 22 (Prop 22), a ballot measure that would exempt app-based companies from AB5. In November 2020, California voters approved Prop 22 by a wide margin – in a major win for corporations that pay workers low wages and avoid providing them with other benefits.

The approval of Prop 22 was a tremendous loss for gig workers throughout California who would no longer be protected by AB5. In response, three drivers for app-based companies and the Service Employees International Union (SEIU) filed a lawsuit seeking to have Prop 22 declared unconstitutional for various reasons.

In late August 2021, an Alameda County Superior Court judge ruled that Prop 22 is unconstitutional and unenforceable. In this ruling, Judge Frank Roesch determined that Prop 22 infringes on the power granted to the California Legislature to regulate compensation for workers’ injuries. Due to the fact, Prop 22 also included language designed to prevent gig workers from unionizing, the court also found that it violated a California constitutional provision that requires laws and initiatives to be limited to a single subject.

What Does This Ruling Mean for Gig Workers?

For now, gig workers whose jobs were covered by Prop 22 will have to wait and see what the courts decide. The sponsors of Prop 22 – including Uber and Lyft – have begun to work against the ruling. Typically, ballot initiatives cannot be amended after they have been passed by California voters, but if any provision is found unconstitutional, it will be considered unenforceable. Depending on what the higher level courts do, this may lead to Prop 22 being declared invalid.

On the other hand, AB5 is still applicable to workers in California who are not employed by an app-based service. In this case, an employee may still pursue a claim against their employer if they believe that they have been misclassified as an independent contractor.

If you believe that your employer has misclassified you as an independent contractor,  you may be able to file a claim against them for unpaid wages and more. A skilled Orange County employment lawyer can help you with the process, starting with a free initial consultation.