How Do I Know If I Was a Victim of Workplace Racial Discrimination?

It can often be difficult to tell when you are being discriminated against, even if you firmly believe that you are being treated unfairly at work. Most employers, managers, and supervisors don’t come right out and say why they are treating you a certain way, or admit to their bias. Instead, racial discrimination often takes a more subtle form. 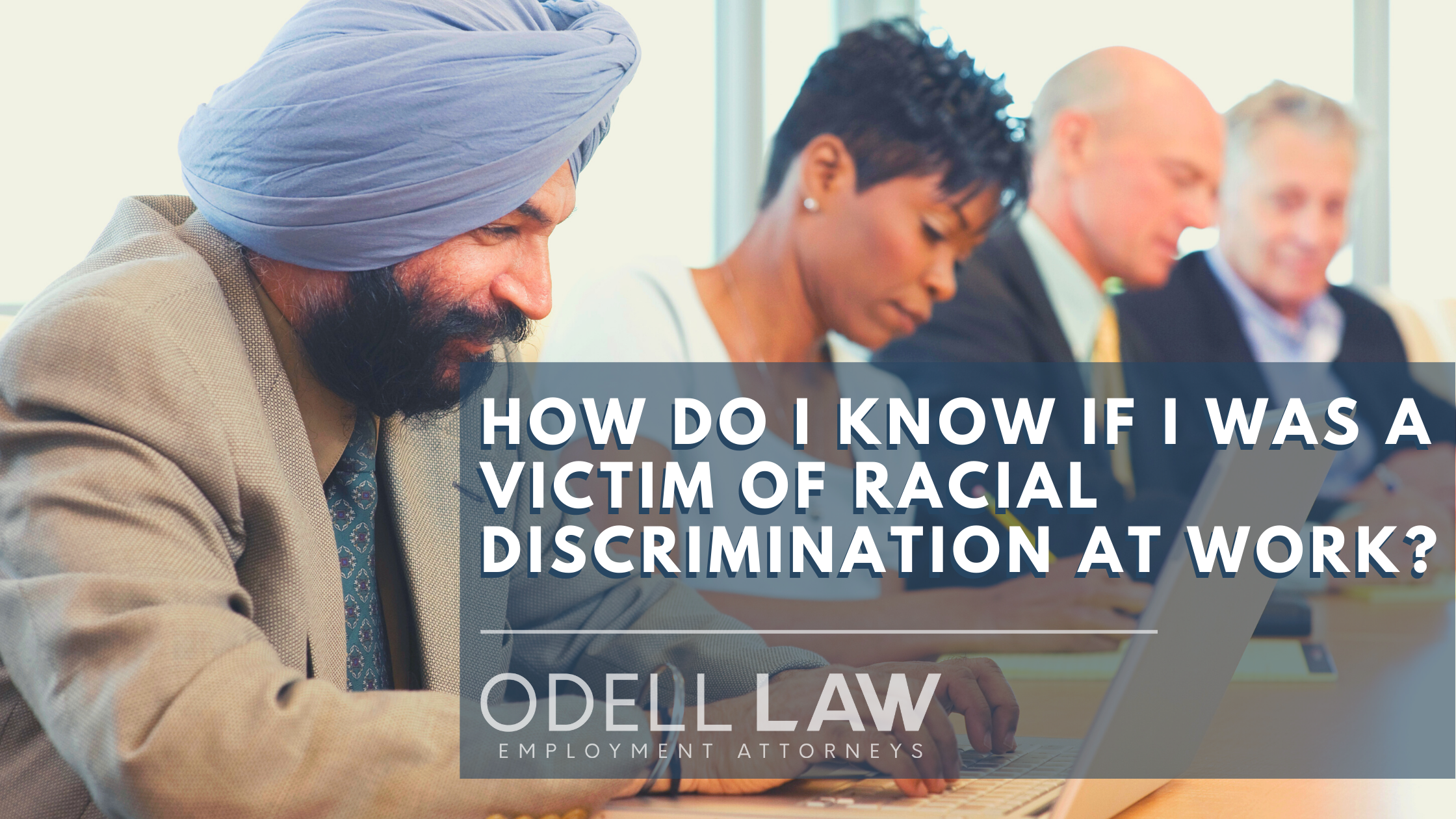 Workplace discrimination based on race or ethnicity is illegal in every state, including California. There are several things that you can do if you believe that you are being discriminated against because of your race, national origin, or color, including filing an employment discrimination lawsuit. First, we suggest contacting a skilled employment attorney that can help you protect yourself and document this kind of illegal activity. Below are some useful tips and information for anyone who may come across racial discrimination in the workplace

What is Racial Discrimination?

Under both Title VII of the Civil Rights Act of 1965 (Title VII) and the California Fair Employment and Housing Act (FEHA), it is illegal for employers to discriminate against employees, job applicants, contractors, and even volunteers based on their race or ethnicity. This type of discrimination can take many forms, from refusing to hire someone to demoting them, or paying them less than employees in similar positions.

While race means different things to different people, it generally means a person’s physical characteristics, such as skin color, hair texture, and eye color. It may also involve referring to a person by a specific color, such as brown, white, or black. By contrast, ethnicity — or national origin — may refer to a person’s cultural characteristics based on either where they were born or where their ancestors were born. It may be linked to their name (associated with a particular region or country), their language or way of speaking, or their membership in a particular group.

How Do I Know If Was Discriminated Against Because of My Race?

An employment lawyer will often look for patterns to determine if you have been discriminated against based on your race or ethnicity. For example, if only certain employees of a particular race are promoted, it may be a sign that there is discrimination in the workplace. Alternatively, if your performance reviews suddenly changed once your supervisor learned that you are Latinx, then it could be a sign that you are being discriminated against at work.

Unfortunately, racial discrimination happens all too often in workplaces throughout the United States, including here in California. Because it can be difficult to spot, we have highlighted several recent cases that illustrate just how pervasive this problem can be.

In 2012, a group of 16 Black and Latinx employee’s filed a suit for racial discrimination against Coca Cola. These employees alleged that they were routinely assigned to the most physically dangerous and undesirable positions, and given tasks that are outside of their job descriptions. These employees further argued that white employees were given better jobs and more overtime hours, even though they had less seniority than the Black and Latinx employees. The culture made it difficult for minority employees to advance or be promoted. When employees complained, they faced retaliation. This lawsuit also came more than a decade after Coca Cola settled a racial discrimination class action lawsuit for $193 million.

In 2009, Wal-Mart also settled its own racial discrimination lawsuit for $17.5 million. The lawsuit was based on discrimination against Black truck drivers in recruitment and hiring. While that lawsuit was settled, Wal-Mart continues to be sued for its employment practices. In 2019, the corporation was sued for racial discrimination based on its hiring practices at a distribution center in Illinois. Wal-Mart had taken over the center, and performed background checks on current employees. According to victims, Wal-Mart’s use of criminal background checks unfairly excluded Black job applicants, by failing to perform an individual review of the applicant’s qualifications. One man was fired from his job after his background check showed a conviction for cocaine possession from 1999. This man is now a mentor for youth who leave prison and a deacon at his church. Significantly, employees of other races were permitted to continue working at the distribution center despite having criminal records.

However, these types of lawsuits aren’t just filed against mega corporations. In 2018, sporting goods retailer Big 5 Corporation paid $165,000 to settle a racial discrimination and retaliation lawsuit filed by a management trainee at one of its Washington stores. According to the employee, he was the only Black employee at this location. He was regularly subjected to racial harassment and death threats, including being called “spook,” “boy,” and “King Kong.” An assistant manager also told him that they would lynch him, while a different manager asked him if he was ready to commit suicide.

As demonstrated by these examples, workplace discrimination isn’t always easy to spot. It is often subtle, but that doesn’t mean that it is any less harmful. If you believe that you have been targeted for unfair treatment because of your race, you may be able to file a lawsuit against your employer with the help of a Beverly Hills employment attorney

PrevPreviousCalifornia Says Yes on Prop 22: Is This A Victory for Gig Workers?
NextCan I Be Fired for Taking Protected Leave?Next