Arbitration Agreements 101 – Is it Dangerous to Sign Away My Rights?

The average person is not very familiar with the way our legal system works. You may have picked up some things from TV shows, books or movies, or perhaps you even had some involvement in a court case at some point. Still, it can be difficult to know what your rights and obligations are in a given context — like when it comes to your job.

Many employees are asked to sign what is known as an arbitration agreement at some point in their career, either when they are first hired or at some point afterwards. You may not think much about signing this type of agreement, or even know what exactly it is you are signing. In essence, this type of contract requires you to go through an alternative dispute resolution process rather than going to court. 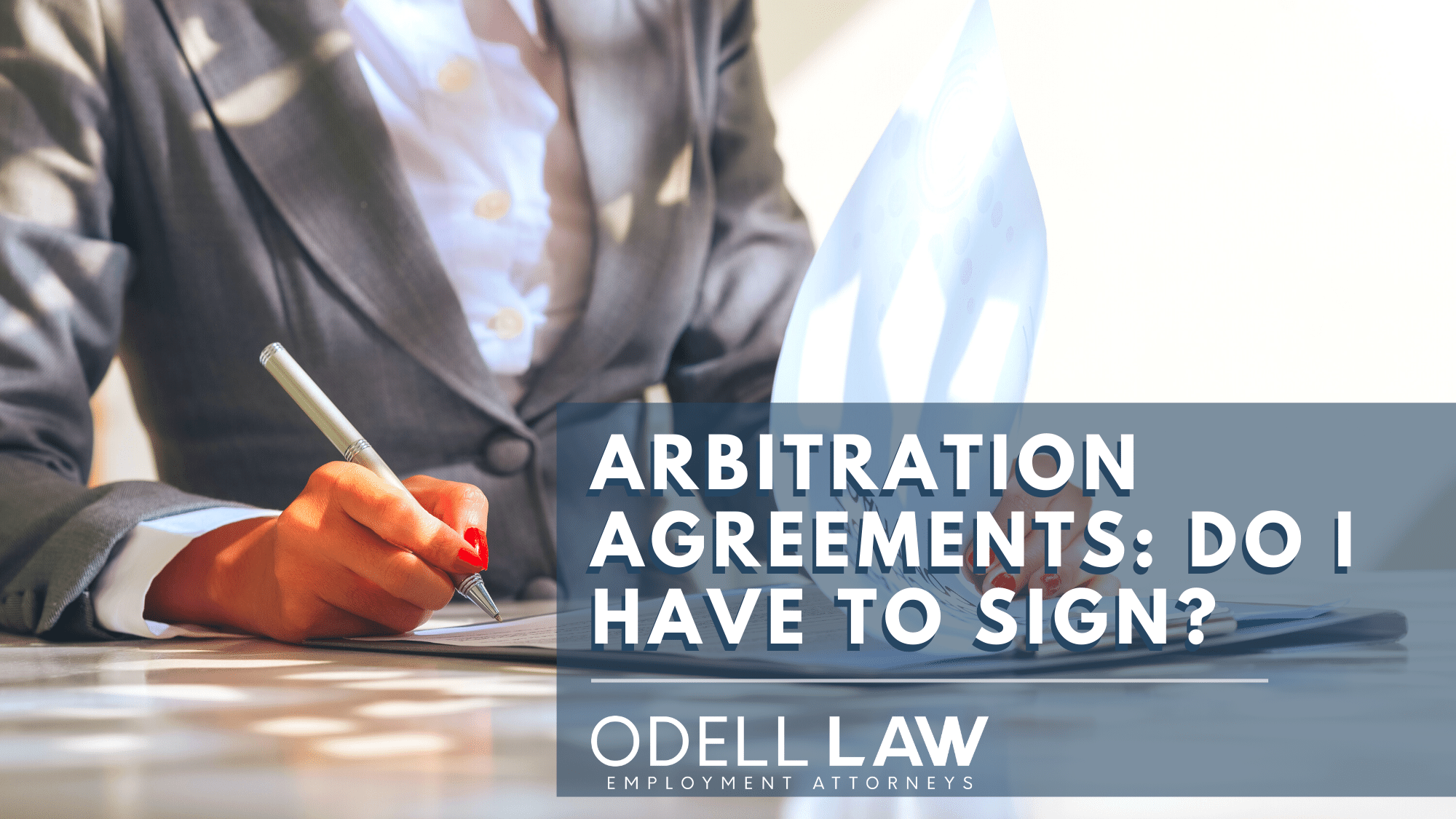 Arbitration is a type of alternative dispute resolution. An arbitration agreement is a contract signed by two parties where each agrees that any dispute between them that arises from the contract will be heard by a private arbitrator, rather than in front of a judge or jury in a California court. In an employment context, arbitration agreements are usually imbedded within an employer’s application papers.

Arbitration is usually a less expensive and much quicker process than attending court when attempting to resolve disputes. The arbitration process permits both parties (employer and employee) to exchange information, via attorneys if they choose, to advocate for their positions relating to the lawsuit. At the arbitration hearing, both parties have the opportunity to call witnesses and present evidence and arguments. It is important to note that under California law employers pay the arbitration fees.

Employers often prefer arbitration to civil litigation for a number of reasons. In addition to the cost savings and the speed of the process, the parties are able to pick an arbitrator. This can be an advantage for employers, who are more likely to have experience with arbitration and will pick an arbitrator they believe to be favorable for their case.

In addition, discovery — the exchange of information between the parties — is typically limited in arbitration than in civil litigation. This also benefits employers who have better access to information about your employment and other facts than you as the employee.

Many arbitration agreements also require you to give up other rights, such as the ability to file a class action lawsuit. This can limit the number of claims an employee can pursue in the future. The agreement may also limit the amount and type of compensation you may receive as a result of such a lawsuit.

Finally, you generally cannot appeal an arbitration decision, as it is considered final. This is different from the court system, where you can appeal to a higher-level court if you believe that the court made an error of fact or law.

How is Arbitration Handled in California?

If you have a valid arbitration agreement, then you won’t be able to file a lawsuit against your employer in court. Instead, any claim that you may have will have to be settled through arbitration.

Stephanie works for a printing supply company. Her boss, the operations manager, has been sexually harassing her for months. She has complained to human resources, but nothing has changed. Finally, she consults an attorney about filing a lawsuit. Her lawyer reviews her employment documents, and tells her that she signed a mandatory arbitration agreement. This means that while Stephanie can still pursue her sexual harassment claim, but it will have to be done through arbitration instead of by filing a lawsuit.

While arbitration does allow you to resolve an employment dispute, it can significantly limit your ability to seek justice. Because many employees do not fully understand the scope of this type of contract, they may sign it without knowing that they are giving up important rights. A new California law seeks to change this dynamic.

In 2019, Governor Gavin Newsom signed Assembly Bill 51 (AB 51) into law. AB 51 went into effect on January 1, 2020. Under this new law, employers cannot require job applicants or current employees to relinquish their right to sue as a condition of being hired, staying employed, or receiving workplace benefits.

Presently, the legal status of AB 51 is uncertain. Multiple business groups have filed a lawsuit to stop AB 51 from going into effect. As of today, the status of this law is currently being reviewed before the Ninth Circuit Court of Appeals. If you have a question about whether or not you can refuse to sign an employment arbitration agreement, contact an Orange County employment lawyer.

As a general matter, it is not a particularly good idea for employees to sign an arbitration agreement with their employer. As described in more detail above, employers prefer arbitration because it tends to benefit them. However, these benefits come at a cost: your rights as an employee.

When you sign an arbitration agreement, you will likely be waiving your rights to:

For these reasons, it is not in most employees’ best interest to sign an arbitration agreement. When you are first hired or if you are asked to sign some documents related to your employment, be sure to review everything carefully, as arbitration agreements can be easy to miss. While the status of AB 51 is still up in the air, you are not protected by this law. Instead, you might be able to negotiate the terms of your arbitration agreement with the help of an Orange County employment attorney.