5 Signs That Your Employer May Be Engaging In Workplace Discrimination

Under both federal and state law, it is illegal to discriminate against employees on the basis of their race, sex, national origin, religion, and membership in other protected groups. Yet, despite the existence of these laws, workplace discrimination still happens and is quite common.

Most people assume that they would know discrimination when they see it. Unfortunately, that isn’t always the case. Workplace discrimination is often more subtle than you might assume. Obvious discrimination, such as a manager openly stating that a woman will never be promoted on his watch, still happens — but isn’t as common.

So how can you recognize more subtle employment discrimination? Below, we outline five signs that your employer (or supervisor) may be engaging in illegal workplace discrimination. If you believe that you are being discriminated against at work, reach out to an Orange County employment lawyer to schedule a free consultation.

1. Employees Seem To Have Fixed Roles

In any organization, you would expect to see a variety of people filling different jobs. If that isn’t the case, it may be a sign of workplace discrimination.

Becky works at a beverage distribution company as an executive assistant. She believes that she is treated fairly, but starts to notice that all of the higher-paid roles, such as sales representatives and managers, go to men. At the same time, all of the lower-level and administrative jobs are filled by women. When Becky applies internally for a job as a sales representative after several years paying her dues as an assistant, she doesn’t get it. Instead, the job goes to a man fresh out of college, with no experience.

This may be an example of a company that is systematically discriminating against women by refusing to hire or promote them to higher-level positions. When Becky was denied a promotion, it may have been part of a larger pattern and practice by the employer. If your company operates in a similar way, it could be a sign that they’re engaging in discrimination.

If most everyone in an organization is the same race, gender, sexual orientation, or is roughly the same age, it may indicate that there is a problem within the workplace. Even in areas of the country that are not very diverse, it is unusual to have a completely homogenous company — especially if the business has more than a handful of employees. In this way, a lack of diversity could indicate that the organization has a discrimination problem.

This may happen in a few different ways. The company may simply not hire a diverse range of people, which may constitute discriminatory hiring. Alternatively, the company may have a culture that discourages people from applying for a job there or staying in the position if they are hired.

Sonia works at an advertising firm. When she was first hired, she didn’t really notice that every one of her coworkers was white, even though it is located in a city that has a substantial Hispanic population. A college friend, Maria, is looking for a job, and Sonia tells her to apply for an open position at her firm. Maria has a degree in advertising and more than 10 years of experience. Despite her qualifications, Maria isn’t hired and a white woman with no comparable advertising experience gets the job instead.

There could be other reasons why this woman was hired over Maria, but Sonia starts to wonder if her bosses are discriminating against people of color. These types of subtle discrimination are indeed difficult to pinpoint, but if the same situation above seems to repeat again and again, it builds a strong presumption that the company is indeed hiring based on a preference for a certain race, gender, age or some other protected class.

Generally, people expect to be treated with respect at work. This does not always happen, particularly in workplaces where discriminatory behavior is rampant. A belittling and hostile communication style is often linked to workplace discrimination.

Of course, a person can speak harshly to others without being discriminatory. However, when a supervisor, boss, or even a coworker consistently speaks to their colleagues disrespectfully, they may make comments that are discriminatory in nature.

A supervisor at Joe’s workplace is known for being rude and sarcastic. Joe has a disability and often walks slowly when he is in significant pain. One day, as Joe was walking back to his workstation from a break, his supervisor started berating him about a project that was overdue. His supervisor a made comment that if Joe works as slow as he walks, it’s no wonder that he can’t get his work done on time.

In this case, the supervisor may have engaged in disability discrimination. Additionally, if it can be shown that the supervisor focuses his rude and demeaning behavior on Joe and/or other disabled employees, it can establish a strong link to a discriminatory animus based on that protected class (i.e. employees with physical disabilities).

Many workplaces have a progressive discipline policy in place to address violations of company policy. When those policies don’t exist — or are not applied consistently — it may be a signal that the company is engaging in workplace discrimination or retaliation. This may even include situations where an employee is subjected to bogus disciplinary action in an attempt to create a “paper trail” to later justify that employee’s termination.

This Can Happen In A Number Of Ways:

Martha has worked for her employer, a manufacturing company, for more than 30 years. She has always done a great job and gotten excellent reviews. Recently, her supervisor has been disciplining her for minor infractions — things that were never a problem before. She doesn’t understand why she is being punished for these issues, until she is fired without being put on a performance improvement plan, even though the company policy is to administer such plans before termination.

At this point, Martha realizes that her company may have fired her due to her age — and that the disciplinary actions were “pretext” (i.e. a false cover reason) for what was likely an illegal termination based on age discrimination. The fact that the company also “skipped” a step in its progressive discipline policy (i.e. termination instead of a performance improvement plan) is also indicative of a pretextual reason for termination.

5. Employees Are Discouraged From Talking About Pay

In California, employers are prohibited from paying employees less than employees of another sex, race, or ethnicity for equal work. Unfair pay still happens, though — and it is often hidden because employers discourage employees from talking about their wages. Employers aren’t allowed to do this, and employees are free to talk about how much they make with their colleagues. If an employer warns workers not to do so, then it may be for a reason: discriminatory pay practices.

Consider The Case Of Tom And Beth:

Tom and Beth work together as managers at a tech company. They have the same title, the same level of experience, and do similar work — but Tom makes nearly $50,000 more a year than Beth does. Beth doesn’t know this, though, because their company handbook includes a notation that salaries are confidential and protected information.

Implying or explicitly stating that employees can’t discuss their pay is illegal under the California Equal Pay Act. When Beth realizes this, she figures out that her company is discouraging workers from talking about pay in order to hide gender discrimination, where female employees are paid less than male employees in almost every position at the company.

If you’ve had any issues or concerns about these topics with your current employer, give us a call at (949) 833-7105 or email us at info@odelllaw.com for a free phone consultation today.

PrevPreviousFact Vs. Myth In Employment Law
NextHow To File A Labor Board ComplaintNext 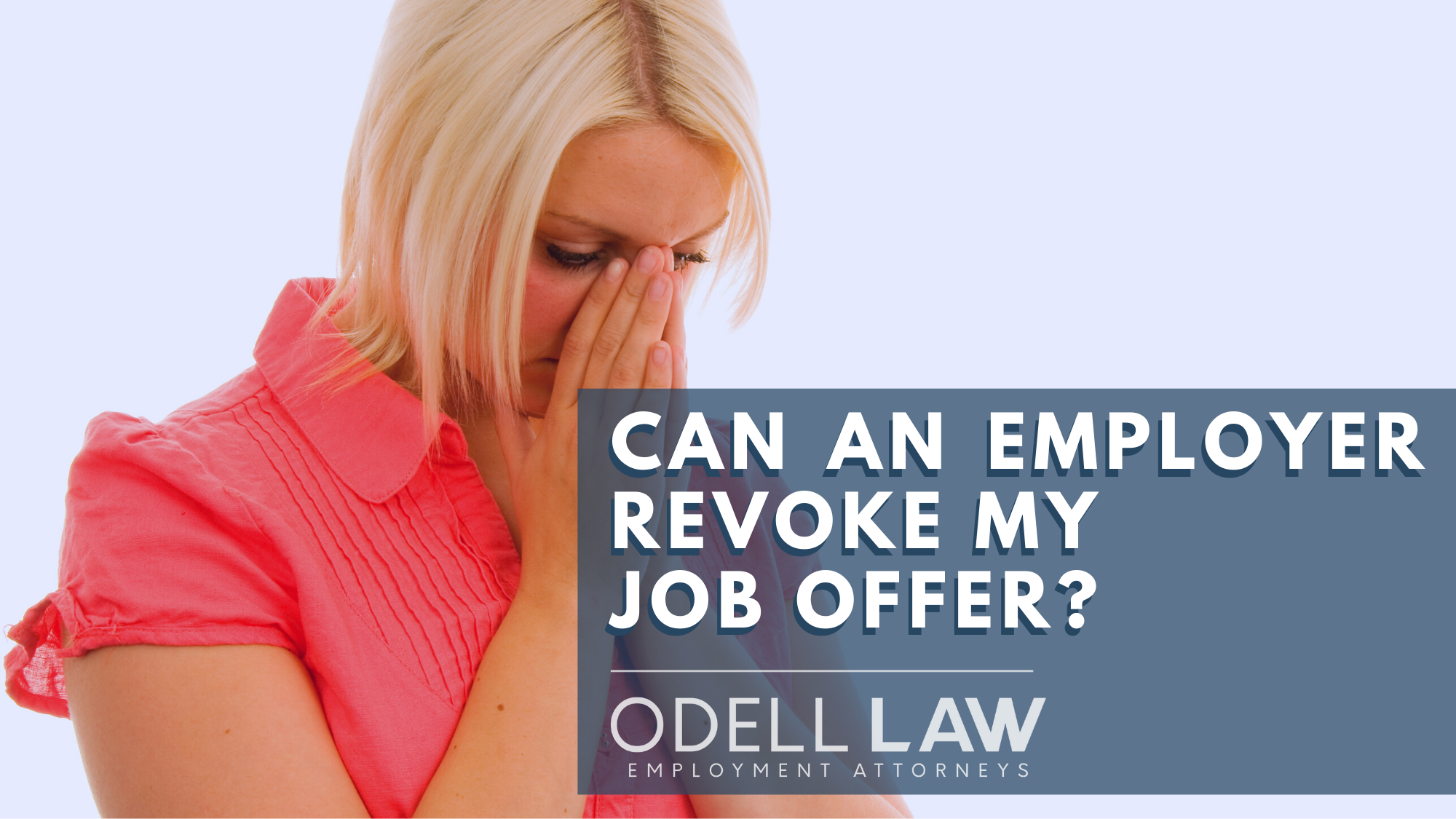